Chalcedony - for a wonderful result! 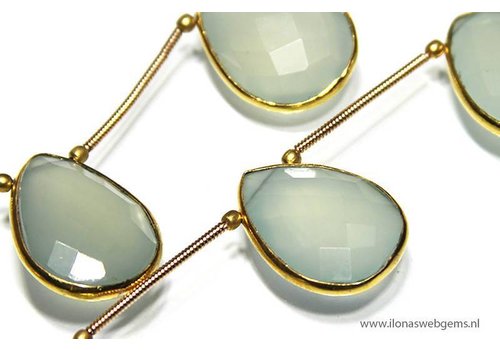 Chalcedony beads are made of quartz type, these are very pure and natural white gems. The beautiful blue color of the chalcedony beads that arise is a consequence of a physical phenomenon, it is caused by the microcrystalline structure of the stone, the so-called Tyndall effect. A huge number of microscopically small crystals scatter the incident light in an astonishing way. The special thing about this is that the blue part of the color spectrum is scattered far more than the red part. Because of that scattering the human brain is actually fooled because the result is that we regard the white stone for a blue color.

Location of the chalcedony beads

Origin of the chalcedony beads

The blue Chalcedony owes its name to the ancient city of Chalcedon, which was located in Asia Minor in Asia on the Bosphorus, opposite Byzantium. Blue Chalcedony is created by rapid cooling at low temperatures and low pressure and therefore has no visible crystals.

Family of this strain is among others Agate, Carnelian and Chrysopaas, these gems also have other inclusions, such as iron or calcium.

It is not only in a blue coloring, we also have many other colors of beads in our collection.

Working with Chalcedony really seems to be a profession and therefore requires the necessary expertise. The German town Idar-Oberstein is known for its precious stones. This town has a long history in sharpening gemstones.

As a constellation, blue Chalcedony beads are counted among Cancer and Sagittarius