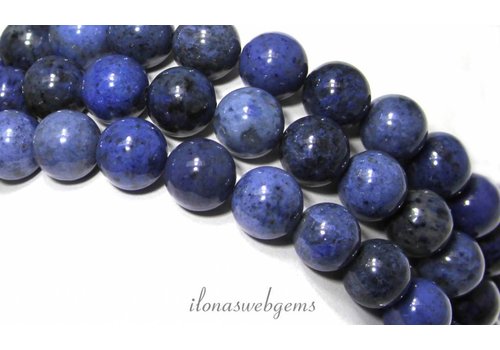 This rock was only discovered in the second half of the 19th century. Most Dumortierite stones are found in France, California, Japan, Nevada, Czech Republic and Madagascar. The best gem quality is also found in Nevada.

This stone is named after the French paleontologist (a scientist who studies fossils) Mr. MA Dumortier who lived from 1802-1873. By the way, the first Dumortierite stone was found in the Rhone by Mr. gonnard. However, this geologist has attached the name of this stone to his friend Dumortier as a token of appreciation for all his merits in the field of his expertise. That is why it is often thought that he made the very first discovery…

A fun and very special fact is that Dumortierite has been used in the manufacture of tableware since 1920. This is possible because the stone at high temperatures (1800 degrees C and higher) produces a beautifully shiny and especially bright white porcelain. Only much later did people grind and polish this rough Dumortierite stone to make the most beautiful beads.

Dumortierite beads promote harmony, they relax and help release or process paranoia. An additional advantage is that this stone would be able to keep your nervous system in balance.

Finally, the Dumortierite beads belong to the constellation Leo and is associated with the month of August.