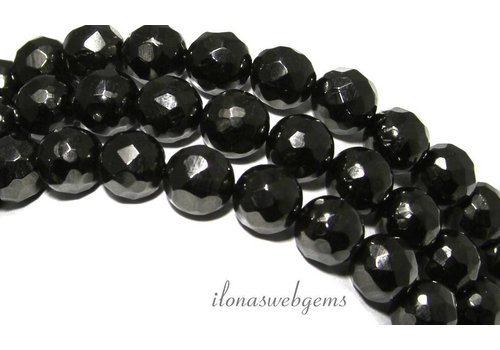 Git is a fossil that was created in the Jurassic period under high pressure in mud from 135 million (!) year old wood of the Araucariaceae tree family. Git beads are found in two forms, the hard Git bead and the soft Git bead, with a hardness of 4 resp. 3 on the Mohs hardness scale.

It is almost impossible to imagine, but Git beads have already been found in the dolmens in Drenthe!
In the Historia ecclesiastica gentis Anglorum (Ecclesiastes of the English) it is already written in 731 that: Britain produces much and excellent jet, a black gem that glows in fire; set on fire, it chases away snakes, and when heated by rubbing, anything you hold against it will stick to it, like amber (with Git, an electric charge can indeed be generated by rubbing it with a woolen cloth).

When Prince Albert died in 1861, his widow Queen Victoria was dressed in mourning black. In the 19th century, she made these semi-precious stone beads popular among the wealthy by wearing jewelry from Git beads with the mourning clothes.
In the roaring twenties, the wearing of long necklaces by young women became a trend in the United States. The necklaces were made of multiple strands of Git beads, extending from the neck to past the (low) waist.
Git beads are traditionally used for monks' rosaries.

The name comes from the Greek Lithos Gagatès which means stone from Gagas. Gagas was a place and a river in ancient Greek Lycia, Asia Minor. Via the Old French jaiet the name was further corrupted into Git. The expression 'jet black' comes from here of course!

Git Kalen has a strong connection with the earth and has a purifying effect on all levels. The stone draws negative energy and pollution (energy that does not belong there) from your system and protects your energy field against negative influences. It helps you to leave negative experiences behind and to come back to yourself and live a pure life. Git supports the cleansing effect of the liver and kidneys.

At Git beads belong to the zodiac sign Capricorn