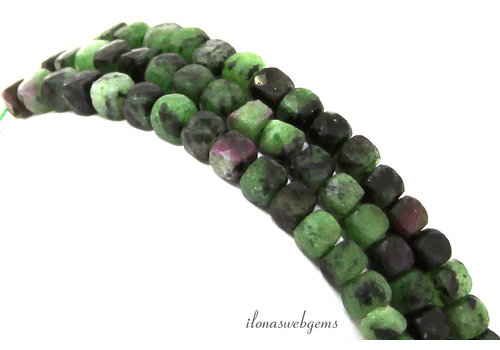 The mineral was first described in 1805 by Abraham Gottlob Werner. He named it Zoisite after the Slovenian naturalist Sigmund Zois sent him some specimens of the Zoisite beads from the Saualpe in Carinthia, Austria. Zois realized that this was an unknown mineral when he first came across it in 1797. It was brought to him by a mineral dealer, one Mr Simon Prešern. Zoisite is found in Tanzania (this variant is called Tanzanite), Kenya (Anyolite), Norway (Thulite), Switzerland, Austria, India, Pakistan and the American state of Washington.

Anyolite is gray to apple green, Tanzanite is the most sought after and is deep sapphire blue to Amethyst purple, Tanzanite also 'changes' color depending on whether you view it in artificial light or in daylight. Thulite last, is the pink-red variety. Zoisite has a glass to pearl luster and a white stripe color.

Zoisite helps you to be yourself and to free yourself from the influence of others. It helps you to find and follow your own path and stop adapting to others when you don't want to. Repressed feelings are brought to the surface so that you can process them. Self-destructive behavior is reduced and creativity is promoted. The stone has the property to convert negative energy and behavior into positive ones. Physically Zoisite has a detoxifying effect, anti-inflammatory, reduces acidification and strengthens the immune system. It promotes cell growth and fertility and has a positive effect on the ovaries, testes, heart, spleen, pancreas and lungs. Because Zoisite is a slow-working stone, you have to wear it for a longer period of time.

Zoisite belongs to all zodiac signs, but especially to Aries and Virgo.